Dairy experts from 70 countries have been discussed the Covid-19 related dairy crisis during the 21th IFCN Dairy Conference on June 2nd – 3rd. The event focused on the status of the dairy world, and the way in and out of the crisis.

2019 – it is important to understand the year before the crisis

Milk production growth at 1.4% was significantly below the long-term average (2.3%) in 2019. This was driven mainly by India, Oceania, Africa and the Middle East. Meanwhile, the rising popularity of milk alternatives in rich countries and lower milk availability in emerging economies slowed down demand growth.
Dairy farm economics looked more positive as the world milk price increased by +6% to a level of USD 37.3 / 100 kg in 2019. Still, for many farmers, especially in the US and EU, this milk price is often “too little to live on and too much to die”, to quote Dr. Torsten Hemme.

The way into the crisis – developments until May 2020 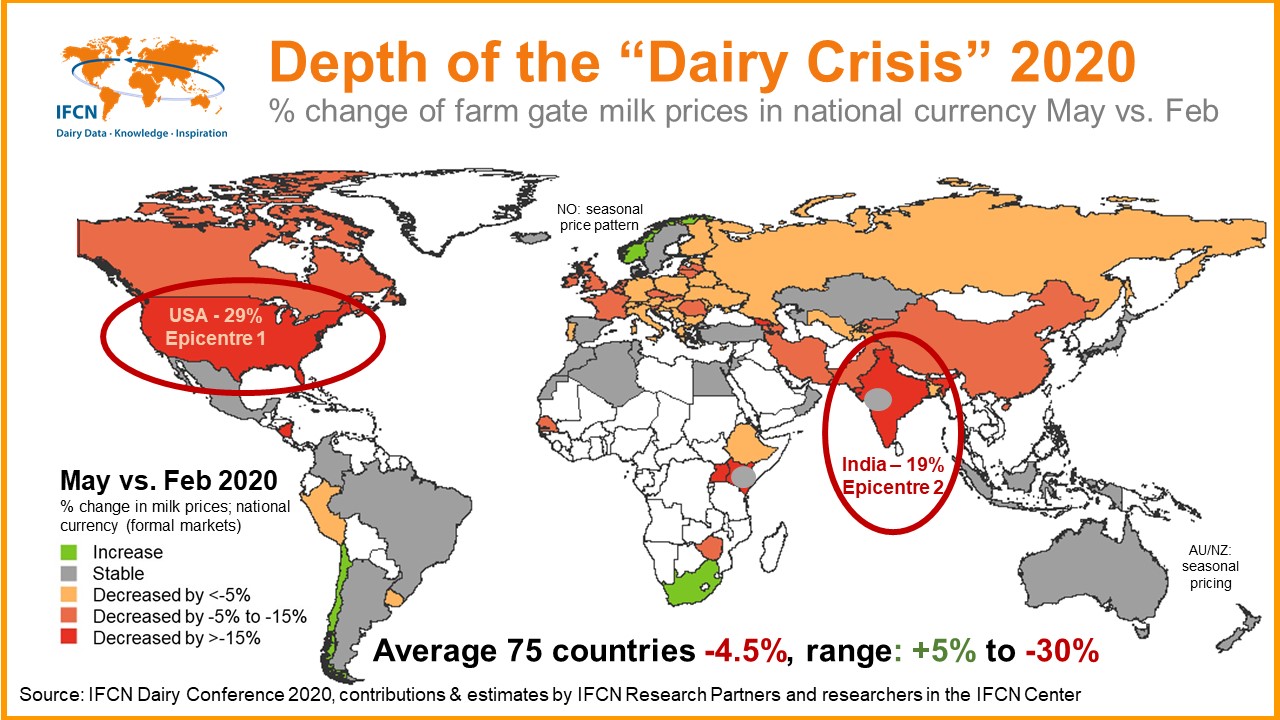 The performance of the national farm gate milk price can be used as an indicator for a crisis. The map describes the national milk price trends for 75 countries in May vs. February 2020. It seems that there is no major crisis yet as the milk prices on average declined by 4.6%. Nevertheless, there are two large countries that could be considered as the “epicentre of the dairy crisis”: the US and India, with drops of -29% and -19%, respectively. The poll among the dairy experts revealed that one third considered their country to be only at the beginning of the crisis. But also, two thirds of the participants thought the bottom of the crisis has already been reached.

The outlook for the world milk price in 2020 remains complex, and future markets and the views of analysts are not aligned. As of early June, dairy future markets expect a fast milk price recovery to reach a level of USD 35 / 100 kg milk in July. This can be described as a “V” shape price scenario. The majority of dairy experts at the conference expects a U-shaped recovery and thus a longer period of time until previous price levels will be reached once
again. The reason is solid milk supply growth in 2020 so far coupled with a high chance of declining per capita demand as a result of the economic crisis.
Further research will be required on dairy stocks and the potential shift of dairy demand in developing countries from informal to formal dairy products, which could have a positive impact on dairy imports. At the end of the conference it became very clear that a real time monitoring of dairy indicators is key. IFCN will update its research in the coming months to help people in the dairy world to better navigate in these times.